Changing misconceptions one hero at a time. This much needed children’s book empowers children with stories of 20 famous and little known Muslim heroes who were trailblazers.

Stories of 20 Mighty Muslim Heroes hopes to inspire and empower children with these legendary multicultural biographies.

Do you know the story of the first nurse? The man who developed the first antiseptics? The woman in charge of the royal library? The female navy commander who defeated the Dutch army…twice! The man who travelled to nearly 40 countries in the 14th century? They all had two things in common – they were Muslim and they wanted to make a difference.

These are just some examples of thousands of Muslim heroes who helped change the world over the centuries. This book hopes to inspire you with the stories of 20 such Muslim heroes from the 7th century – 19th Century. Let this book leave you inspired with tales of bravery, determination, intelligence, and curiosity. This book aims to inspire hope in children and adults. It also hopes to change misconceptions about Muslims and help build an inclusive and diverse community.

Read about the heroes during the Islamic Golden Age who made outstanding contributions to Science, Arts and Education. Learn about inspirational women who never backed down and left their mark in this world. Be inspired by people who were curious about the world until the day they died. 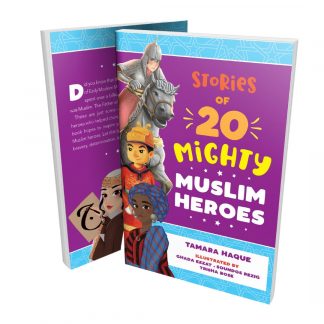